Be a protagonist at this platform for busines and knowledge

Home > Others > CO2 Capture and Conversion Leaders you Must Know

CO2 Capture and Conversion Leaders you Must Know 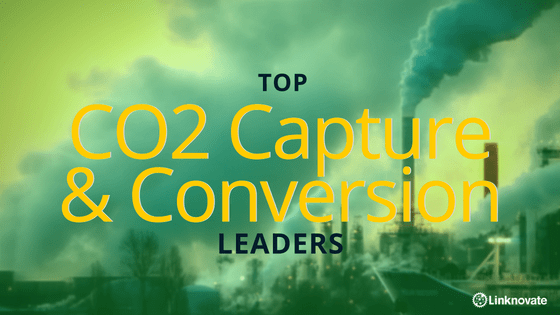 The United States and China dominate the innovation efforts on CO2 capture and conversion. Academia (universities and research labs) is the one bringing out more records in a field that is still under extensive research.

Carbon dioxide emissions from power plants and factories are among the biggest contributors to global warming. This challenge is one of the most pressing problems our planet faces.

To prevent CO2 from reaching the atmosphere, it must be captured from smokestacks and stored underground in perpetuity or converted to useful products.

Since underground storage of CO2 faces often severe public resistance, the conversion of captured carbon dioxide into useful chemicals or fuels is an attractive alternative, and researchers worldwide are exploring new ways for improving this process to make it more efficient.

CO2 capture and conversion is a field in which the main players are academic organizations. Among the leaders, we can see universities and research centers from around the world, which is an indicator of its relevance.

Among the leading organizations, Sogang University (South Korea) has been very active recently. They are working on the photocatalytic conversion of CO2 and on methods for the measurement of the speed of absorption, viscosity and heat of reaction of the solvents of CO2 capture. Besides, they have filled a patent application on this method for CO2 capture.

Another relevant university is the University of Texas at Austin (USA). They are studying different CO2 capture and conversion systems that use amines.

The Australian research center CSIRO is participating in several European Projects for CO2 capture and conversion. ICAP (€6M), HIPERCAP (€7,7M) and TOPS (€4M) projects are all oriented either to CO2 capture after combustion or to water production by capturing CO2 in coal power plants.

When looking at enterprises, Toshiba (Japan) has several recent patent applications related to CO2 capture systems. They are working on the electrochemical reduction of CO2.

Although academic institutions dominate the field, the leading organization in CO2 capture and conversion is a corporation: Alstom (France). They have filled several patent applications on methods to reduce CO2 emissions via capture, modification, and desulfurization.

Also from Norway and participating in the ECCSEL project is the Norwegian University of Science and Technology. They are studying CO2 capture from ionic liquids and developing amine-based membrane contactors.

The Imperial College London (UK) is also a very active university, with grants from both the European Commission and the UK’s national system. ROLINCAP (€3M) stands out and aims to identify and test novel phase-change solvents for CO2 capture. In addition, they have published research on the optimization and reduction of costs of the capture and storage of CO2.

Curiously, Tsinghua University (China) also has participated in 2 European projects: ICAP (€6M) and IMPACTS (€6M), which are both related to CO2 capture and transport. As for research, they mainly focus on CO2 capture after combustion and the hydrogenation of CO2 with catalysts.

Countries Leading the Advancements in CO2 Capture and Conversion

Both United States and China are leaders in CO2 capture and conversion.

The USA leads the business sector (corporations and SMEs). This is due to the work of companies like Dioxide Materials, which makes systems for recycling carbon dioxide into fuels and chemicals, and devices for the electrocatalytic conversion of CO2.

The CO2 capture and conversion trends are mainly related to post combustion CO2 and gas capture, and with CO2 absorption.

Some relevant organizations and startups that are contributing to these trends are KEPCO, Solvay, Corning, and Innosepra.

KEPCO (South Korea) is working in sorbents for post combustion CO2 capture, and has a patent on wet-type carbon dioxide capture equipment.

Finally, Innosepra has several grants from the American NSF agency to work on energy and capital-efficient sorbents as well as processes to mitigate the loss and degradation of the solvent during the capture of CO2.

CO2 capture and conversion over Time

As everything related to sustainability, this technology has enjoyed good health in recent years. From the more than 700 new documents released in 2010 to 1800 in 2014, the topic has experienced considerable growth. It has regularly moved over 1000 documents per year and promises to continue that way thanks to the R&D of the main CO2 capture and conversion leaders.

Let's keep in touch!
Sign up to our newsletter